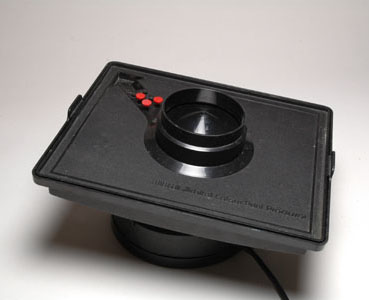 Processing sheet film is a perennial problem, especially for the beginner. The Paterson Orbital tank, designed for processing colour prints, is extremely useful for formats up to 8x10 inches.

Processing sheet film is a perennial problem, especially for the beginner. The Paterson Orbital tank, designed for processing colour prints, is extremely useful for formats up to 8×10 inches. It can take one 8×10 inch or 18x24cm or whole plate; or two 5 x 7 inch/13 x 18 cm/half plate; or four 4×5 inch/9x12cm (or presumably quarter-plate, though we have not tried it).

As the illustrations show, it is essentially a processing tray with a curved bottom and a light-trapped lid. It can be loaded in the darkroom or in a changing bag, after which processing can be carried out in normal room lighting. It is normally used with the domed support base, which is available in two versions, manual and powered, but it can be used without either, simply as a covered, light-tight tray.

Better still, the volumes of chemicals needed are absurdly small, as noted below.

roughening the inside of the tray

Athough film can be processed in an unmodified Paterson Orbital, it is a good idea to roughen the base so that the film does not stick to it. This has at least four advantages. First, the film is easier to get out. Second, the backing is infallibly removed during processing: without the roughened base, the backing may have to be removed in a separate tray while re-fixing. Third, it allows the film to slip about during processing, greatly reducing the risk of uneven development if the motor base is used. Fourth, there is no danger of chemicals being trapped under partially-stuck-down films, so processing is more consistent and washing is more certain.

We roughened ours (we have two) by ‘kissing’ them repeatedly with a Dremel tool fitted with a small burr. This requires careful washing afterwards to get rid of the debris. We have heard of those who have placed innumerable tiny drops of adhesive on the base, and yet others who have carved deeper channels. All seem to work.

The processing sequence is exactly the same as for any other daylight tank. Fill with developer (via the top); drain (via the corner); add short stop or fixer; drain; wash, either by multiple changes of water (half a dozen changes, each with 30 seconds agitation, should suffice) or with running water.

Developing times of at least 5 minutes are all but essential, in order to avoid uneven development, and for the same reason, developer should be added while the tank is being agitated. With longer development times (8-10 minutes) this becomes ever less important.

Regardless of the quantity of film being developed, the Orbital requires a minimum of 55 ml (two ounces) of processing chemicals, though most people use a little more: anything from 75 to 150 ml (3 to 6 ounces). With such tiny volumes, ‘one shot’ processing is entirely feasible.

Do not be deceived by those who suggest that this is not enough developer. Most of the developer, in any tank, is used for wetting the film quickly and evenly: the amount of developer that does the work is a teaspoonful or two.

The Orbital Processor was originally designed for processing colour prints, so black and white should not be a great problem. The tray has quite a high thermal capacity — it’s a good-sized chunk of plastic — and the developer can of course be brought to the appropriate temperature in a water bath. Even so, we find it easiest to process at ambient remperature, making appropriate adjustments for deviations from the standards of 20 C/68 F or 24 C/75 F.

Agitation must be constant, given the very small amount of developer used. If you want to use it without the base (manual or power), you will need significantly more than the minimum 55 ml (2 ounces) of chemicals. We recommend about twice as much. At three times as much, there is a significant risk of spillage out of the drainage corner.

PrevPreviousKodak Ektar 100 film
NextHow Do I (And Why Should I) Load 35mm Bulk Film?Next