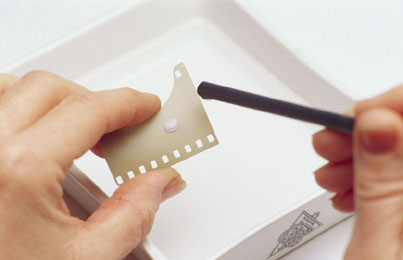 Film fixer can be re-used repeatedly -- but how do you tell when it is exhausted? The classical trick is to check the clearing time, i.e. the time it takes for the film to go clear in the fixer.

Film fixer can be re-used repeatedly — but how do you tell when it is exhausted? The classical trick is to check the clearing time, i.e. the time it takes for the film to go clear in the fixer. This can be rather subjective, though, and it is much easier if you adopt the following simple strategy.

When the clearing time of the used fixer reaches twice the clearing time for fresh fixer, the fixer may be regarded as exhausted, and can be discarded or recycled (silver recovery). There is a generous safety margin here: you could wait until the clearing time is three times as great, and the fixer would still be just about usable, though fixing times would be very long.

Important: Different films have different clearing and fixing times. Usually, slow films clear and fix faster than high-speed films, so if you use different films, you need to do a fresh fixer test for each different kind – but you need only do this once for each kind, assuming you have standardized on one fixer and one dilution.

The classical advice is to fix the film for not less than twice, and not more than three times, the clearing time. With most films, this remains the best advice, as it ensures the minimum wet time and minimum film swelling. With some modern ‘high tech’ films this will not, however, be long enough to get rid of the pink dye in the film — and washing would then need to be very prolonged in order to wash it out. In these cases, fix for the manufacturers’ recommended times.

Do not worry about over-fixing by following the manufacturers’ recommendations. Yes, it is possible to over-fix, but you need to fix for a very long time indeed before the fixer starts attacking the image itself — at least ten times as long as the clearing time, and probably twenty times.

This test is valid only for film fixer. With paper, silver build-up in the fixer is far more important — which is also why you should not use the same batch of fixer for both film and paper. For paper, simply follow the manufacturers’ guide-lines for the number of prints that can be fixed in a given volume of fixer.