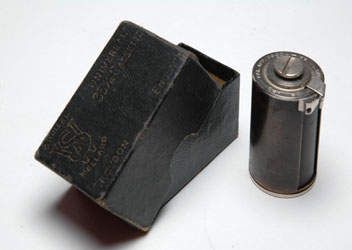 The vast majority of cassettes for 35mm cameras can be divided into two types, the sort with a fixed velvet-lip light trap and the labyrinthine type.

The vast majority of cassettes for 35mm cameras can be divided into two types, the sort with a fixed velvet-lip light trap and the labyrinthine type. We vastly prefer the latter, for reasons that will become apparent below. There is also a residual category, usually camera-specific though the Agfa Rapid cassette was used in a surprisingly wide variety of cameras, not just from Agfa.

The basic question is getting the right length of film on the centre spool, wound emulsion in. Don’t laugh: when Roger was given 800 feet of outdated FP3 in 1966, he more than once loaded it ‘backwards’ with the emulsion out, so all exposures were made through the base of the film. We’ll come back to film lengths later.

This is the familiar standard cassette that was introduced in the early 1930s, and is most widely used today. It has appeared in three main forms.

The most common current form for factory-loaded film is the so-called ‘staked end’ type where the end cap is so tightly crimped onto the main body of the cassette that it is difficult to remove it without damaging the end-cap or the cassette body or both, rendering reuse of the cassette problematic.

These are based on the principle that light doesn’t go around corners. There are two shells, inner and outer. Inside the camera, the two are rotated relative to one another so that there is a clear, open slot through which the film goes. For loading and unloading the camera, and for carrying the cassette, they are rotated so that the openings are anything from 90 to 180 degrees apart; the film passes between the inner and outer shells, hence ‘labyrinthine’. Opening and closing is done automatically with most designs, but with the Shirley Wellard the cassette must be opened and closed manually.

Their great disadvantage is that most are camera-specific (e.g. Leica, Contax, Kiev, Nikon) and fewer and fewer cameras are designed to use them: even Leicas no longer actuate the Leica self-opening cassette.

There is however one labyrinthine cassette that can be used with just about any camera that has a pull-up rewind knob, the Shirley Wellard Universal. These have not been made for decades but still turn up at camera fairs or on e-Bay, and because they are near-universal (or near-Univeral), we deal with them first.

The trick with these is the four little studs on the bottom of the film spool, clearly seen in the illustration below. Normally these sit slightly outside the corresponding holes in the bottom of the cassette, but if the spool is pushed down and twisted they engage and the inner shell can be rotated: clockwise to close (the same direction as rewinding) or anticlockwise to open. This is done by pushing down on the rewind knob and twisting in the appropriate direction.

Two forms of adjustment are provided to fit the cassette to the camera: a properly-fitted Shirley Wellard fits perfectly and will not rattle at all. One is the vertical adjustment, and the other is the rotational adjustment. Both are most easily understood from Shirley-Wellard’s own instruction leaflet, reproduced on its own page.

Unlike the Shirley-Wellard, where the inner and outer shell are permanently linked, the two shells of the the Leica cassette come apart for loading. The pictures will make this clear. It is important to note, though, that there are two models of Leica cassette, the early ‘black mushroom’ model for screw-mount Leicas only and the later ‘chrome mushroom’ model which can be used in all Leicas except the later M-series. We are not sure when Leicas stopped automatically opening and closing these cassettes via a key in the baseplate but they certainly don’t work in our MP with its Leicavit-M.

These appear to be interchangeable — which is no surprise as the Kiev is essentially a Contax II/III — but we have not had the opportunity to try both kinds in both cameras. We couldn’t find our Kiev cassette which is why it isn’t illustrated here.

The Agfa Rapid system, long obsolete, had no centre spool. As far as we are aware it derives from the Ansco Memo of 1927. The film was pulled out of one cassette by the film transport mechanism, and pushed into the other where (if you were lucky) it curled up of its own accord. The old feed cassette then became the new take-up cassette. The longer the load, the harder it was to persuade it to feed properly. Anything much over 20 exposures is pushing your luck as well as the film. On the bright side, cassettes are easy to reload (but hard to clean).

A few manufacturers have offered 250-exposure models, or 250-exposure backs, with corresponding cassettes: Leica was the earliest of the major systems to do this, but Nikon and others have done the same. The cassettes in question take about 10 metres (33 feet) of film.

Most other cassettes are even rarer, such as the extra-small cassette for Tessinas and one or two from the 1920s and very early 1930s before cassettes were standardized: in those days, every manufacturer made them to his own design.

With cameras where you do not have suitable cassettes, it is often possible to improvise some form of feed cassette (usually based on the centre spool of a standard modern cassette) and load and unload the camera in the darkroom. This is hardly convenient but if you want to try some ancient camera it is worth remembering.